Posted by Harry Ricker - in Blog, Television - Comments Off on Deepsea Challenge Wonderful Exploration Film Marred By Shameless Self Promotion 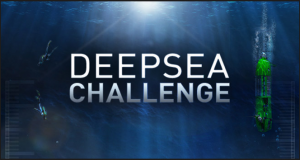 On February 23, 1960, the Trieste bathyscaph set the record for the deepest dive by a manned vehicle at a depth of 35,797 feet,by visiting the deepest place of the earth’s oceans, The Challenger Deep. What is little known is that no one had returned to repeat this feat since that successful dive more than 50 years ago. As a young 12 year old boy, I remember vividly the resulting publicity, and the strange looking vehicle that was used to accomplish this feat. In those days there was a lot of anticipation of futuristic underwater exploration and colonization. This was occurring at the same time as the space age, and the dreams of man in space, the colonization of the moon, and nearby planets. In those days we were told that exploration of the earth’s oceans was as important as the exploration of space, since the depths of our own oceans were as unknown to scientific exploration as was outer space. It was a 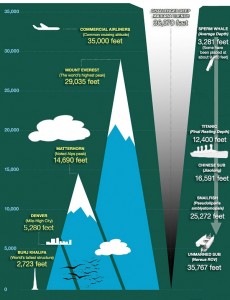 deja vu experience to hear the same arguments repeated in the film Deep Sea Challenge, more than fifty years later, and to discover that after fifty years, no progress had been made in achieving this goal of underwater exploration, that had been so eloquently voiced in the optimism of the 1960s. In particular, the fact than no one had repeated that magnificent feat of the dive to the deepest point in the ocean since that day in February 1960 55 years ago was a sobering reminder that ocean exploration had lagged far behind the dreams of the 1960s. 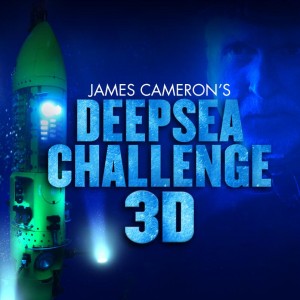 The film opens by showing James Cameron as a young boy pretending to be a deep sea explorer peeking out through the viewing port of a bathyscaph made from a cardboard box. Cameron says “It’s my dream to build such a machine,and get inside it and dive to the deepest places in the world, to  my own eyes. I started preparing for these dives when I was a kid, getting in a cardboard box.Close the lid, and imagine it was a submarine. Boosh. Drawing with a crayon, you know, some gauges. Fuel and…depth.Yeah, I was a real science geek, you know, but for me it was all about trying to understand the world,understand the limits  of possibility.” That is a great inspiring introduction, but it portray a dream that is almost an impossibility to fulfill today. It is certainly a great thing for James Cameron, a rich man with an ego and ambition to fulfill it, but for the average person it is a dream he can only relate to distantly, and vicariously. I immediately began to wonder, is this film about anything other than a rich mans vanity? Unfortunately, I was right in thinking that way about it.

The film doesn’t answer the main question that comes up first. In the trailer we are told that: “We are actually going to do things that the governments of 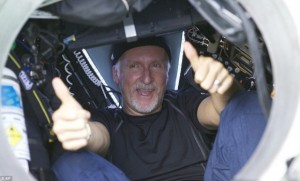 the world can not now do”. Why not? The trailer doesn’t give an answer to this mystery. The script tells us that “…we often think that our planet has been completely explored. But the depths of the oceans remain a mystery. The extreme depths have barely been glimpsed. Down there is the last great frontier of our world. There are 12 trenches that are over 4 miles deep.They’re thousands of miles long and have a combined area greater than North America. That’s a dark continent down there, waiting to be explored.” It is a pretty amazing statement and it begs the question, why after more than fifty years is the deep sea ocean exploration not completed? There is an answer, but it is not provided by the film. The answer is world politics and the United Nations Law of the Sea Treaty or UNCLOS. In that treaty the use of the worlds oceans were restricted, and so there is no need to explore them if there is no economic benefit. Hence the dreams of ocean exploration were stopped in their tracks by politics.

The trailer also says in promoting the film “We are going to do something nobody else can do”. This seems to imply that the UNCLOS restricts governments from doing deep sea scientific research but private scientific exploration is permitted under the treaty. This writer is a critic of experts who justify science by the type of argument, involving hype and propaganda, that uses science to justify spending tax payers money to promote their own personal agendas. In this case that objection is avoided because the money is being provided by private and not public sources. But even though the expedition is privately funded, there remains the question of whether or not the objective of scientific knowledge is justified. In this case, there is reason to be critical of the claimed scientific and educational benefits. Real science, if it is not to be a tool of the government for social control, must be relevant to the average person. Unfortunately, this does not appear to be the objective of science as presented by the film Deep Sea Challenge. That film presents science as a benefit of the rich elite, where the rest of us admire the great accomplishment of one mans quest for adventure.

Unfortunately, this type of adventuring quest seems to be more about what science actually involves rather than what its image suggests. The image of scientific knowledge is that it is supposed to be for the benefit of all mankind. That image is entirely negated by the current political environment as represented by The UNCLOS. That treaty restricts the economic benefits, and so implies that only the elite can benefit from deep sea exploration. That is of course exactly what the film portrays. It is a bitter irony. In the film, the inspiration for deep sea exploration begins in the dream of a national project of exploration financed by the US Navy as a result of the purchase of the deep sea vehicle Trieste, and ends with the private accomplishment of a single extraordinary rich man. What the UNCLOS has produced is an ocean full of opportunity for deep sea adventure reserved for the rich and famous, and not an ocean to be used for the benefit of the average person. 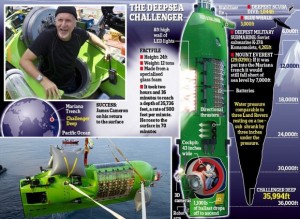 This is just the beginning of a lot of things that the film does not tell us and so looses its educational value. The film doesn’t discuss the organization and financing of the expedition. There is very little description of the exploration craft itself, how it was designed, who designed it, and the physics of how it works. As for the science in the film, there is precious little of that as it seems that we are not told that there were any scientific accomplishments at all.

The main problem with the film is that it promotes an elite impression regarding scientific exploration. That might have been mitigated if the film had 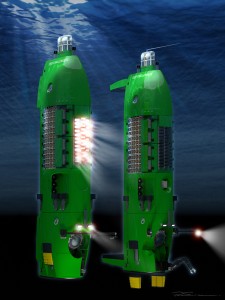 actually promoted science education by using a student as its primary character, and followed that student in his training of piloting of the Deep Sea Challenger. That may have been because of the dangers involved. There were many and that produced an aspect of danger that gave the film its dramatic value. The dives were fraught with the possibility of equipment failure that as Cameron says during a test dive, “We have to know that the sphere is safe. If it buckles on a real dive, it’ll implode at hypersonic speed and I get chummed into a meat cloud in about two microseconds. The clinks I heard when we tested it the first time, when we got rid of the stress cracking, that hasn’t happened. It’s 16,000 psi. Looks like we’ve done it.” On another of the test dives Deep Sea Challenger’s thrusters failed failed due to a computer code bug reminding the audience that deep sea exploration is very dangerous.

In the end, I felt that I had certainly got my money’s worth out of this film. It is a great 3D experience. It draws you in to the experience of dangerous deep dive ocean exploration. The 3D images are wonderful and entertaining. I was disappointed because it did not tell me more about the technology of the deep sea vehicle and I did not learn much about the scientific accomplishments of this expedition.